The news is now official. And for this occasion, we met David Steegen, Public Affairs Manager, and Emmanuel Rutsaert, Sponsorship & Hospitality Manager, for a joint interview. 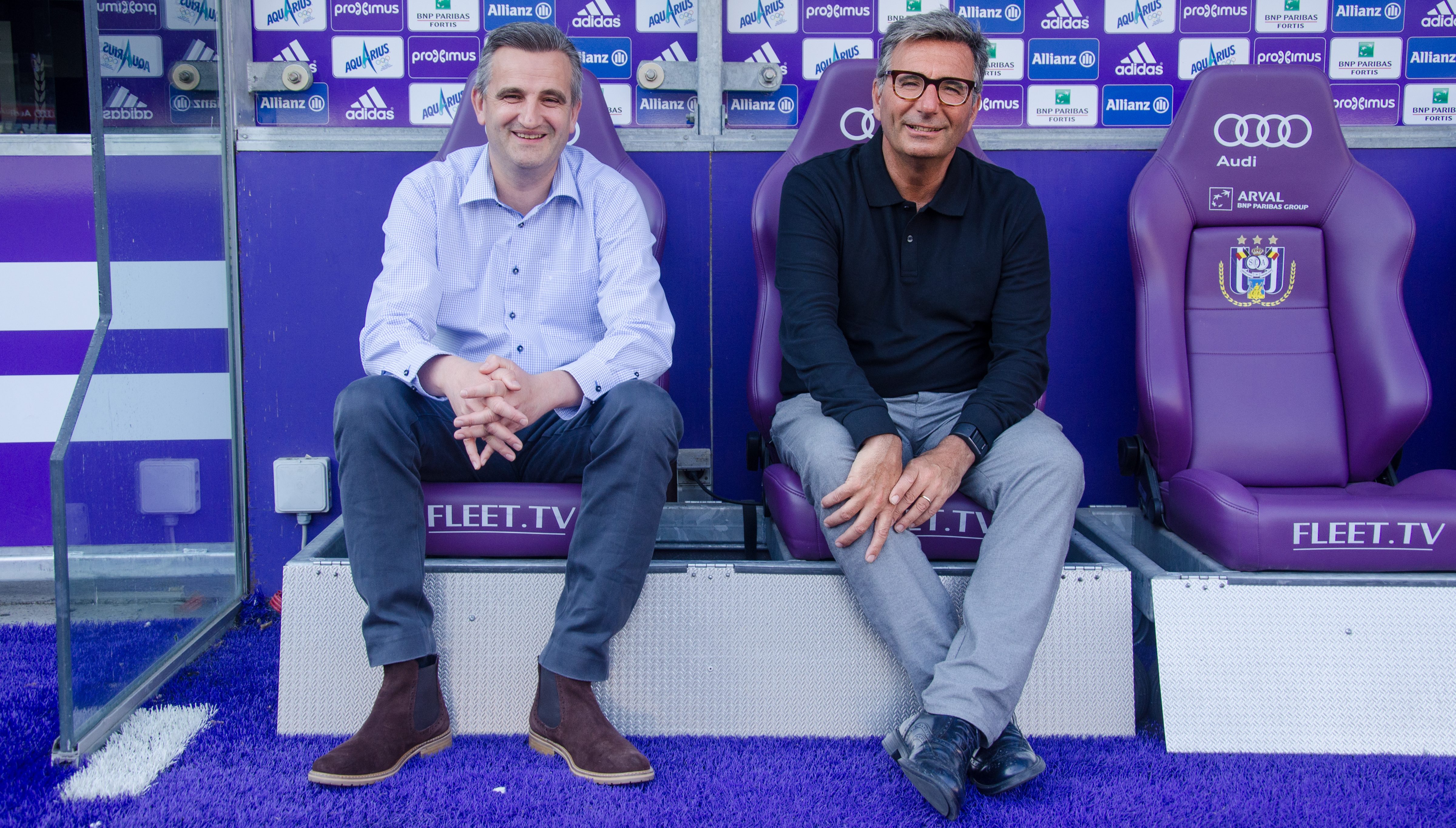 How many people are subscribed to the stadium?
D – Today we have 18.000 subscribers and 2.000 seats sold over the counter. We always keep a quota to sell over the counter because we are obliged. It’s 500 places more than before!
E – And 3.000 VIP seats.

Could you briefly introduce us the Anderlecht list of hits?
D – We are 34 times champions…
E – … I give up. David could talk about this for hours and hours!
D – 9 Belgian Cup, 3 European Cup, 2 UEFA Super Cup in 78 and 76. Until 89 we were part of the 20 biggest clubs of the world. Of the world! Formerly we were in the top 10 of budgets, today we are around 270th in Europe. Between 1970 and 1989, we played 7 finals of the Belgian Cup. And then since mid-80, the nineties, the market has totally changed with big European championships which have liberated significant resources compared to ours.

How does the RSCA culture allow you to have such results?
D – The first reason is a historical one. In 1970, we had a new president called Constant Vanden Stock who invested a big amount of capital in the club. It enabled us to run big transfers throughout the years. We were looking for the best players from around the world, whilst still training young players. He had the ambition to be one of Europe’s greatest players and he succeeded. The other reason is of geographic nature. Being located in the capital of Belgium and the capital of Europe definitely does have its perks. This attracts the biggest companies, which releases considerable resources. We can’t argue about the fact that professional football is also a matter of resources.Today there are 3 to 4 big Belgian clubs. Especially Bruges and us: we are the biggest from a budget point of view, followed by Genk and the Standard. We always stayed on top. For instance, we played the 54th European Cup season in a row. There are only Benfica and FC Barcelona which are doing as well.

Several Red Devils are coming from the RSCA, what’s the place of the training of the youths inside the club?
D – 35% of the national team of the last World Cup was trained by Anderlecht. It’s one of our main values. Today, there are three good youths who are coming from our academy who are first-team players: Sebastiaan Bornauw, Alexis Saelemaekers and Francis Amuzu. They aren’t even 20. We also trained Kompany, Tielemans, both Lukaku brothers and Januzaj.

How to explain the presence of supporters everywhere in Belgium?
D – First thing first, thanks to our location. Because we are in Brussels, the biggest Belgian city. It’s a city attracting many people, whether for tourism, for football or for something else. And above all, there are great successes of course. We played the big finals of the European Cup. We can compare us to Real Madrid, Ajax, PSG or FC Barcelona: we are clubs from the capital.
E – It gives us a national aura. People want to bind themselves to success, and because we are champions on average one year out of two, we gather fans as much in Ostend than in Arlon.

With the arrival of president Marc Coucke, what’s the new vision for the club? Which changes are ongoing?
D – From a commercial point of view, we made amazing steps.
E – We made progress with partnerships. We used to have 14 partners, today they are 32. From the hospitality point of view too. We invested in the spectator experience, for B2B as much as for B2C. For B2C, we have created a new Fan Zone where supporters can meet, drink beers or eat burgers. For the B2B we invested in 7 new catering offers. The top is the Saint Guidon, managed by the two-starred chef of Bonbon. There is also a Chef’s table option: the chef changes for each match, keeping a Brussels face, which is important for us. We also have two brand new bars, linked to our partner drinks. There is a new commercial impetus, well received by B2B as much as by B2C. What Marc also wants to improve is the animation inside the stadium. For instance, behind the goal, we increased the capacity to generate additional atmosphere.

With those changes in the stadium, there were big renovations. Could you tell us more about the food universe?
E – When I started here, a frequent criticism was that it was always the same. We had two caterers and a few variations. Here we decided to offer a wide range of services, from a brasserie option – which is the cheaper – to the Saint Guidon option – which is managed by Christophe Hardiquest, the stars chef of Bonbon. Between those two services, we have other options like a seated dinner; the Chef’s table; the Kitchen Park with a different theme each month; the Food Market in the form of a walking dinner. The aim was to surprise guests at each match by offering a wide range of choices.

How many tons of fries are sold in front of the stadium of Anderlecht each year?
E – 3,5 tons by season, which is about twenty matches.

Is there a difference between the beer consumption in case of an RSCA victory? In which order?
E- The consumption increases by 20% when we win. When we are champions: it doubles!