He never imagined he would be working “in sauces”, but today he can brag about having founded one of the most iconic ketchup brands: Brussels Ketjep! Paperboy went to meet him. Here’s his story.

A ‘ketje’ is a boy from Brussels who hangs out in the streets and who is (sometimes) more charismatic than his parents. Every Brussels-born kid was once a ketje, and some remain so forever. In 2012, one of these ketjes was driving his 1981 Honda Civic home around 1 in the morning. He had just sold his first ever ketchup. That’s how it started. No market studies, no visit to the bank, not even a sales agreement. Brussels Ketjep was born without warning. That Wednesday, a few restaurant owners from the capital ordered cases of the first Belgian ketchup brand. Over time and as word got around, other distributors joined the adventure to provide their expertise and service. Today, the ketchup is distributed in Flanders, Wallonia, Europe and beyond. The brand’s fame grew with the progressive expansion of the product range. Brussels Ketjep has been able to grow while keeping its ‘ketje’ spirit. 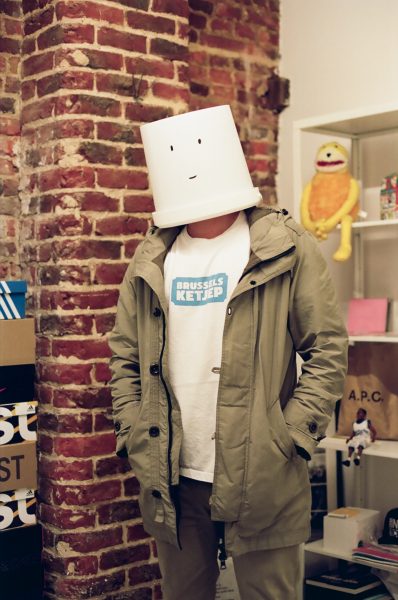 Paperboy: How did you come up with the idea of making ketchup?

The Ketje: By eating a sandwich with ketchup. The whole time I was eating it, I was looking at this American bottle of ketchup. Everyone knows it. I wondered nobody tried to do better. I was never a huge fan of ketchup. I thought it was plain and too sweet. But I love tomatoes and everything to do with them. So I thought I’d make a ketchup that actually tastes like tomatoes. A bit less sugary, but that still tastes like a real ketchup.

P: Were you a cook before?

K: Nope. But I grew up in a bookstore where my mom sold candies and chocolates, and I worked in catering. So I’ve always been interested in food in the wider sense of the word.

P: How do you enter a market with such major competitors?

K: Naturally. By visiting all the restaurants that seemed to also want to offer good products to their customers. I kept my day job for two years and developed Brussels Ketjep at night and on weekends. The second year, I even delivered wholesale orders early in the morning before going to work.

P: When did you go full time?

K: When I understood that I didn’t know how to properly work and organize both jobs. I was overwhelmed by the growth of Brussels Ketjep. So I told my boss that I wanted to quit so I could go all-in in my sauce business. I bought a truck and it took off.

K: Continue developing the brand in the restaurant industry both in Belgium and abroad. We’re also starting unique partnerships with original projects and passionate people!