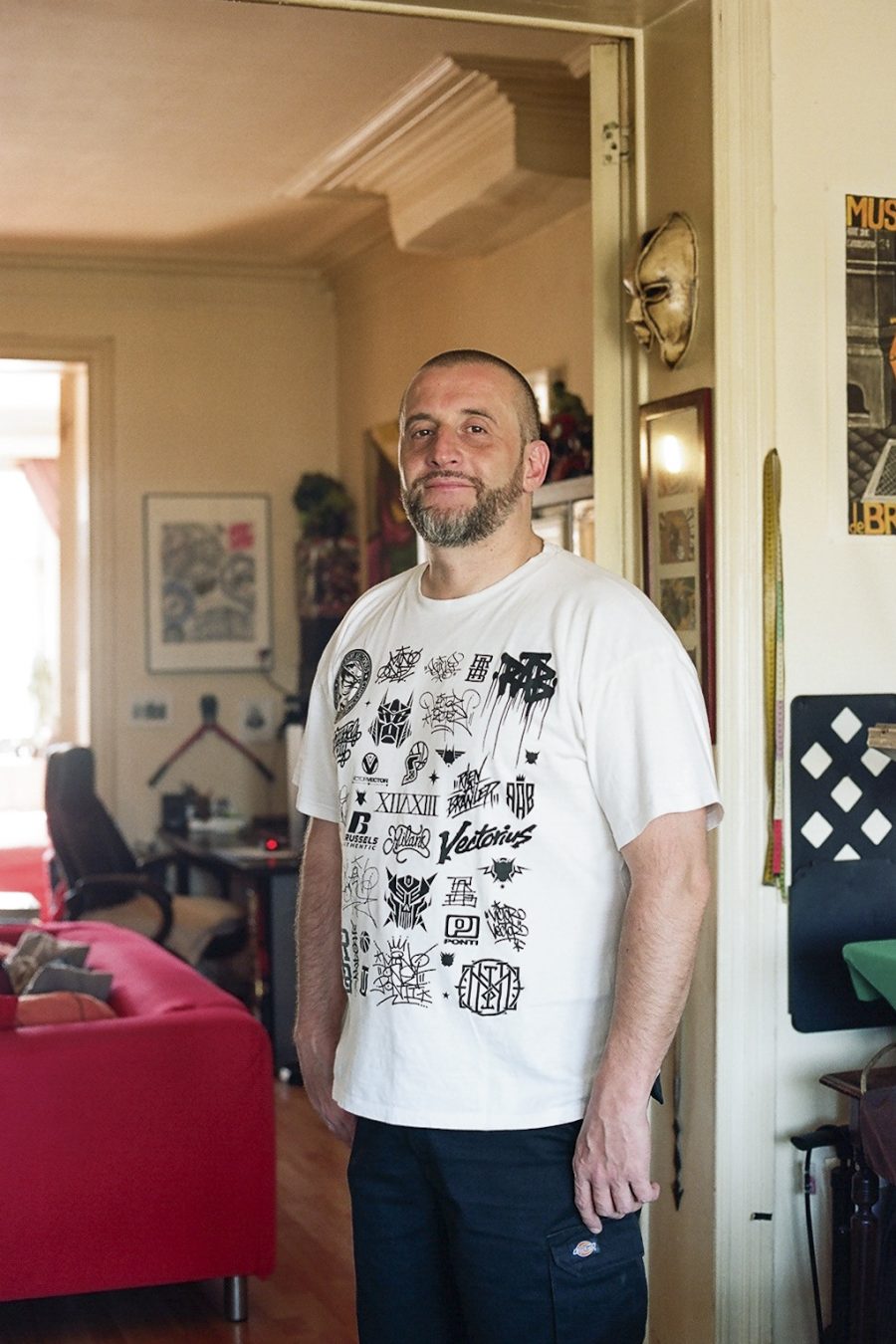 Describe yourself, your background and what you do today.
I’m an Italian based in Schaerbeek, and a self-taught multidisciplinary artist. Going by the name of VictorVECTOR. I’ve been an active member of the mythical collective R.A.B. Crew since 1993. As the son of an artist mother, I’d played around with drawings, paintings and colours since a very young age. Later on, I was hugely interested in tagging and graffiti art as a teenager, frequenting Basket-Ballers, BreakDancers and Taggers along the years. At the beginning of the 90s I had an opportunity via a tagger friend to meet my future accomplices, and that’s how I came to be one of the official members of R.A.B. Since then, I’ve been surrounded by the crème de la crème of graffiti, rap and DJing, refining and evolving my own art along the way.
In 1994 my homie Gane (CNN) and I became interested in screen printing on all sorts of media, but especially t-shirts. And so the RAKLERZ Team was created: a crew of crazy scientists creating ephemeral pirate workshops, from which our first t-shirts and stickers were produced with incomparable quality. I still make these t-shirts and also customise clothes, but mainly do graphic design now.

How has where you come from shaped who you are?
Neighbourhood life of mixed cultures, rich in encounters and exchanges. Like Margharita Square, the high-level basketball playground (that also served as my “headquarters”), where one of the very first street basketball teams, the Sensi Flyers was established. My family, friends, crew and neighbourhood are what define me today.

How would you describe your attitude to work?
I’m very passionate about my work, and I’m curious by nature – I observe, scan and am always on the lookout for the next thing that’s going to spark an interest in me. Originality is key for me, too. I’m also very serious when it comes to work, even though deadlines can be rather difficult to respect sometimes! The most important thing to keep in mind is to make sure the end result pleases the client before I can be satisfied myself.

To you, what is a Ketje?
The neighbourhood kid who knows everyone, and in turn is known by everyone for his adventures and acts of bravery. A pure local product.

What do you think distinguishes Belgium, and its people, from the rest?
Belgium, the nation of self-mockery; the country with many charms – many of which are still unsuspected and to be discovered. Small in size, but big in talent. We know how to joke around, even if some inter-communitarian “Belgian jokes” don’t win over all the crowds. A country of many differences, which will become its strength once unionised.

If you had to nominate three people that, to you, best symbolised Belgium in its full glory, who would they be and why?
Toots Thielemans, a real Ketje of the Marolles, with plenty of humility, simplicity and incomparable talent. He played alongside the greatest artists, rubbing shoulders with all social classes without ever forgetting his roots. His harmonica accompanies me very often during my moments of creativity.
The Borlée brothers – and the family in general – symbolise precisely our country’s motto, “Unity makes strength”. Even with a clear lack of support from the Royal Belgian Athletics League, they continue to demonstrate to not only our country but also the world more generally that they are among the best in their field.
Les Snuls, the legendary Belgian comedian troupe, for never taking themselves too seriously. I also liked the way they played around with national and regional symbols, making a poignant remark.

If you had to take visiting guests out on a Sunday tourist trail, where would you take them and why?
I don’t have a specific route – but why not start with a tour of Brussels’ many graffiti spots before cycling through the Sonian Forest, finishing off with a large picnic on the edge of the Tervuren Park ponds? Granted, as long as it doesn’t rain!

Tell us about the first time you discovered BK sauces.
During a night hanging out with the homies: we were starving and craving for fries, and since I had a friend working in a fritkot near Brussels’ Bourse/Beurs, we made our way over there. And so we discovered the legendary Dallas!

Can you recollect your best Belgian joke ever?
Why do Belgians always remove their glasses during a breathalyser test? Because it’ll count as two glasses less!

Why do Belgians do it better?
It’s not that we do better than others; we just have a unique way of doing things!