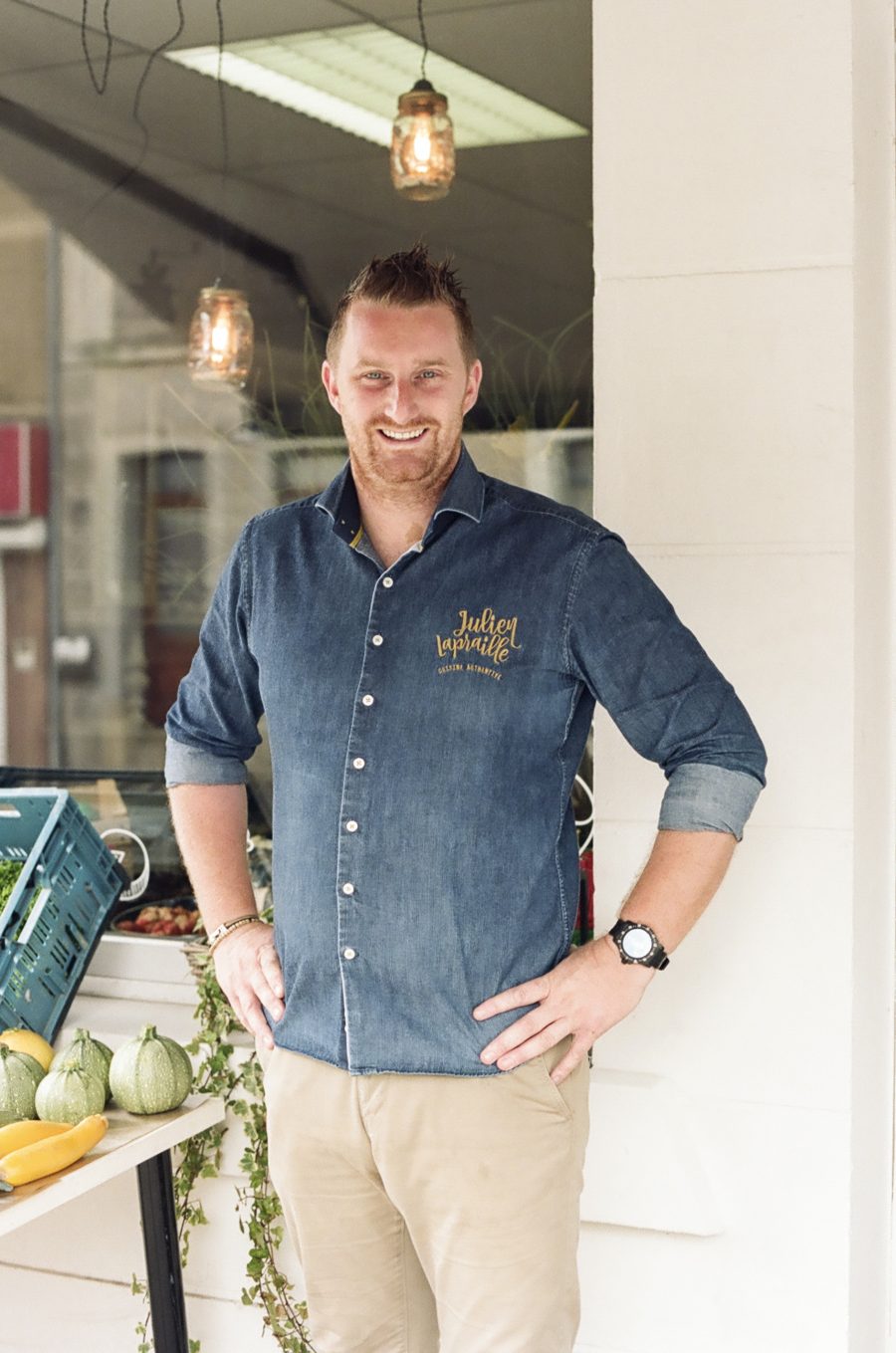 Describe yourself, your background and what you do today.
After learning hotel management at Institut Ilon Saint-Jacques in Namur, I honed my specialisation with an extra year learning dessert-making at Lycée Raymond Mondon in Metz. After working in various starred restaurants, I got the chance to participate in the TV show Top Chef France, where I was picked up for not only my culinary skills but also my big mouth! I joined RTL Belgium straight after to host various shows, including my own Le Marché de Julien, which is broadcasted every weekend on Bel RTL and La Grande Balade every Saturday on RTL. I am also a radio host at Radio Contact for the “Food Morning” each Wednesday.
My concept and business of home cooking has been gaining popularity since 2014, and I also organise various culinary events on the side, like farmers’ or gourmet markets. On top of that, I also opened my first store Le Marché de Julien in Marbehan, where I push local producers to the forefront.

How has where you come from shaped who you are?
My passion for cooking, maybe? It’s hard to say, even if I’ve felt it since I was a child. No one in my family has ever worked in the hospitality business – I’m the first one in my extended family to cook for a living. I remember how during a family meal, I ate some ham, complimenting my grandmother on how good it was. In fact, it was duck breast. I was already eating fine food as a toddler!
My paternal family are made up of self-made people who love to work and create, never counting the hours. I often look to my father as a role model: always working, always wanting more…

What do you think distinguishes Belgium, and its people, from the rest?
Familiarity with anyone, even strangers. Belgians are welcoming, smiling and quickly put everyone at ease.

If you had to nominate three people that, to you, best symbolised Belgium in its full glory, who would they be and why?
Grand Jojo, festive and close to his people.
Thomas Meunier, who got to where he is in such a short space of time thanks to his talent, perseverance and intelligence.
François Damiens, a touching person and great actor. I look forward to meeting him one day over a nice beer.

If you had to take out-of-towners to one essential restaurant in Belgium, which one would it be?
Le Cor de Chasse in Wéris, simple. An incomparable value for money. Top-notch atmosphere, service and cuisine. A great time guaranteed.

If you had to take visiting guests out on a Sunday tourist trail, where would you take them and why?
To Rochehaut for its views and nature.

Tell us about the first time you discovered BK sauces.
I first heard about it via social media. The first one I actually got to taste was the Mayo – killer!

Can you recollect your best Belgian joke ever?
Why do Belgians take their glasses off to be breathalysed? Because that’s two glasses less!