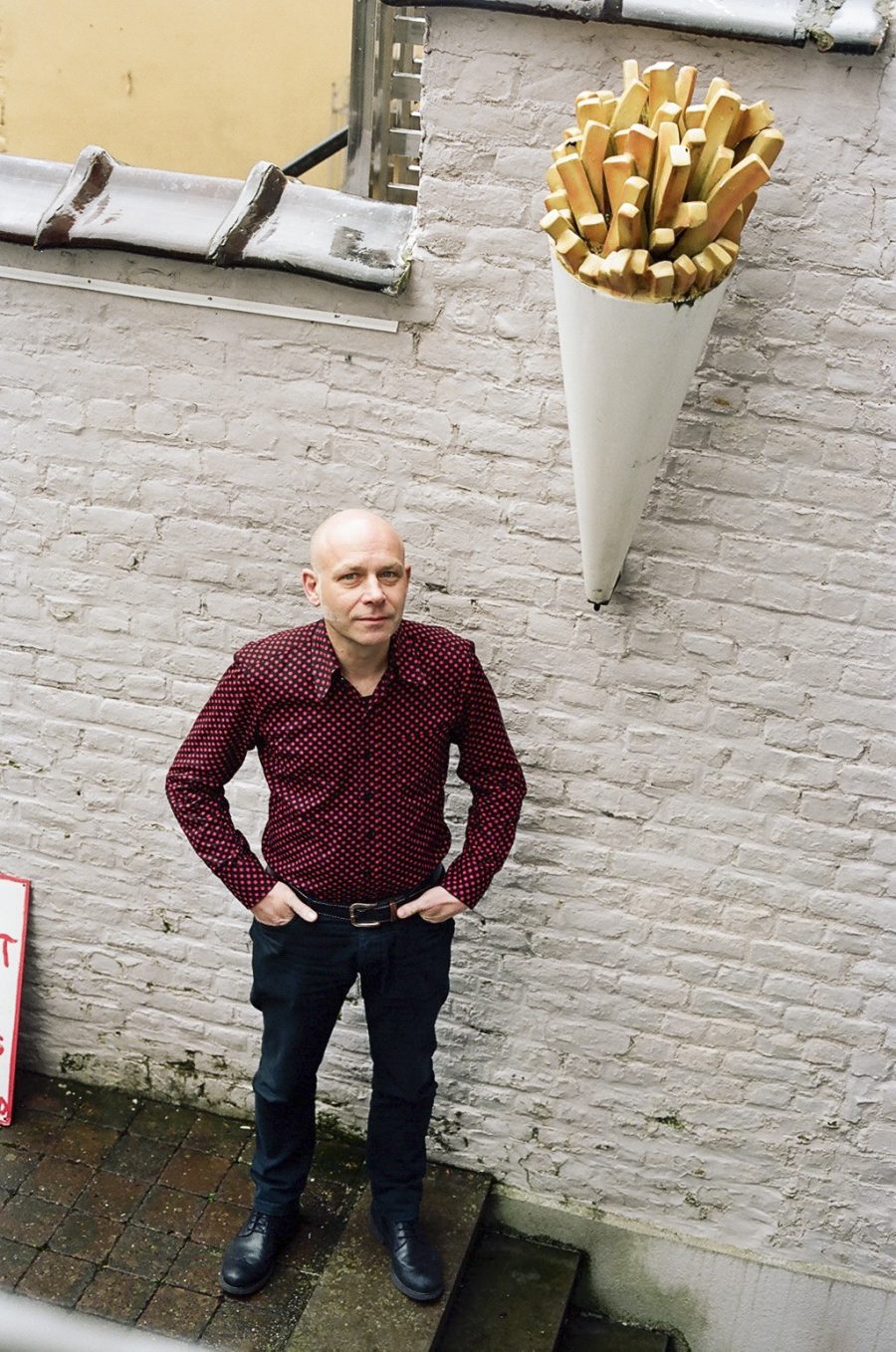 Describe yourself, your background and what you do today.
I’ve been working as a journalist, editor and project manager for a good while now, from print to online media. Rockers, teen idols, net gurus, health and wellness icons, creators, Belgian icons, industry barons, the less fortunate, genial engineers, cool cats, everyday people, Walloon romance experts, people with a hole in their skull to preserve their life, sports champions, … I’ve never been able to keep track of the number of souls I’ve met along the way.
Then one day in 1997, I launched the webzine Frites.be with my late friend Christian Azoeuf: a humorous, satirical and self-mocking platform for – you guessed it – Belgian fries. People began to ask us questions about fries more and more frequently, and we did our best to answer every question. So I began to meet frituristes, or craftsmen making fries, artists paying tribute to fries, gastronomy historians and such, and soon came to realise that there’s a real and dynamic universe around the simple fried potato stick. To cut a long story short, I now own a collection of hundreds of objects, documents, interviews, artworks and whatnot, all concerning fries. I also wrote the first expansive francophone book on Belgian fries, titled Carrément Frites (2012). And over six years ago I opened Home Frit’ Home, a three-in-one concept with the Belgian fries as the common denominator: a self-catering apartment offering a complete Belgian immersion, the Belgian Fries Micro Museum and Belgo-Belgian Art Gallery. We’re open and free to the public every first weekend of the month and guarantee plenty of fun.

How has where you come from shaped who you are?
I’m from Tournai/Doornik, in Western Hainaut, close to the French border. The Ch’ti region, if you will. Having said that, I’ve also grown up in Flanders, specifically Kortrijk and Deinze. I went to so many concerts there during the 80s. Besides Tournai/Doornik, I also studied in Mons, the city of the Doudou. I moved to Brussels afterwards – I enjoy the diverse mixes that you find in the capital.

How would you describe your attitude to work?
Both lazy and passionate. I’m convinced that work is not our purpose in life – there are so many other things to do! Eating fries and tasting sauces of course, but also discovering other universes around us. Anyway, I work with passion – and when there’s passion, there’s results, because you have to work to satisfy your passion. But don’t worry, I also have friends and family. A fry feels so lonely when it’s the only one in a cornet; no one can live like that.

On a personal note, what would you say you’re the proudest of?
Not owning a Rolex.

To you, what is a Ketje?
By definition, a little guy. But “Ketje” is so Belgian – and Brussels even more so – that it goes beyond that. A Ketje is free in his or her mind, and that’s why he or she is spicy and subversive.

If you had to nominate three people that, to you, best symbolised Belgium in its full glory, who would they be and why?
A very tough question – a lot of people I pass in the street every day symbolise Belgium. Moreover, is there only one Belgian spirit we can speak of? To name a few that come to mind: Félicien Rops, Arno, Benoît Poelvoorde, Annie Cordy, Panamarenko, Kamagurka, Stromae, René Magritte, André Balthazar, and countless others.

If you had to take out-of-towners to one essential restaurant in Belgium, which one would it be?
I would take them to the south of Belgium, like Grivegnée for instance. This Liège suburb is lucky to host Aux Chandelles and their fantastic boulets, which won the Boulet de Cristal award last year.

If you had to take visiting guests out on a Sunday tourist trail, where would you take them and why?
I would like to take them to Charleroi for an urban safari! Charleroi is notorious for being the “ugliest town in the world” – do you know how lucky we are to live so close to it? I don’t think enough people recognise how much of a passionate adventure Charleroi is today.

Sauces, in Belgium at least, are intrinsically linked to French fries. What’s your combination of choice?
Belgian fries, I think you mean. Mayonnaise is the basis for a lot of sauces, so it has to be mentioned. The rest – its “children”, if you will – uses a variety of spices, herbs and colours to accommodate every taste. Anytime a sauce is good it becomes a whole story in its own right – just take Dallas, for example. And don’t forget the often forgotten but historical Belgian Pickles!

Tell us about the first time you discovered BK sauces.
Once upon a time, so long ago… I heard that a Ketje from Brussels decided to reinvent the ketchup into the Brussels Ketjep. Humbly and honestly, without any help from the industry. It was clear that this was the beginning of something big. And soon enough, I discovered the Mayo in a Brussels-based concept store – was it Belgikïe, or Belge une fois?

Can you recollect your best Belgian joke ever?
How do you drive a Belgian crazy? Lock him up in a round room and tell him there’s a fry in a corner.